Count Me In: Shape Your Future Douglas County

Count Me In: Shape Your Future Douglas County 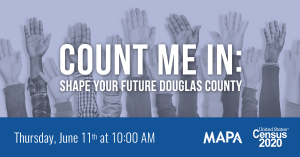 “Even with those uncertainties we need to continue our census efforts and continue them with a new sense of urgency, it’s of bigger importance today.” – Douglas County Commissioner Mary Ann Borgeson

Those remarks from Commissioner Borgeson were made during the webinar Count Me In: Shape Your Future Douglas County on Thursday June 11.  MAPA, along with key partners in the community, partnered with the Census Bureau to host the webinar.

Commissioner Borgeson also addressed the challenges of current events on the efforts to get a complete census count.

“COVID-19 Coronavirus will affect our census outreach, as well as the recent civil unrest that is taking place within our country. Even with those uncertainties we need to continue our efforts and continue them with a new sense of urgency, it’s of bigger importance today. With today, I think you’ll find that information most informative and helpful in our quest to achieve our accurate count and to make sure everyone is counted.”

This was a strategy seminar for partners to share:

Partners from the metropolitan area spoke on behalf of their communities; these presenters included:

After the opening remarks, Blanca Ramirez, Partnership Specialist of the U.S. Census Bureau, started the webinar by giving an overview of the 2020 Census operations timeline adjusted due to COVID-19 and Nebraska/Douglas County Focus Points.

Ramirez emphasized the census is important because it conducts a count of population and housing that allows for results to be disseminated to the President, the States and the American People for apportions, distribution of federal dollars to states, and is used to decide how many congressional seats each state retains.

The 2020 Census has three ways to respond: online, by phone or a paper questionnaire.

David Drozd, Research Coordinator for the Center for Public Affairs Research at University of Nebraska Omaha provided an update on response rates within Nebraska. Nebraska overall is doing well in self response but gaps exist. 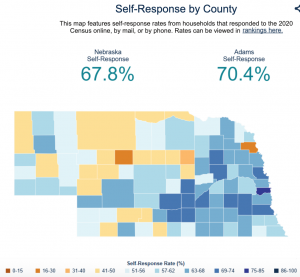 Eastern Nebraska counties and metro areas are doing better than the western and more rural areas of the state. Drozd demonstrated the response rate maps and data charts that update in real time so the audience could learn more about self response rates.

Ralston City Clerk Rosemarie Russell provided a quick update as to what is happening in her community. Ralston closed buildings from public access in early March, which had ended preparation of kiosks and public computer access for responding to the census. The City has been updating information through its newsletter and social media platforms. 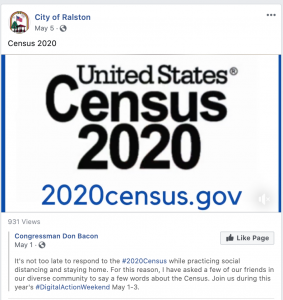 “As we continue to focus on protecting the community’s health, we are also focused on protecting Ralston’s economic well-being,” said Rick Hope, Ralston City Administrator.

Russell reiterated the importance of the census and how response rates will impact the City of Ralston and the quality of life of its citizens.

Viridiana Almanza, the Director of Family and Community Well-Being from the Latino Center of the Midlands, updated outreach efforts in the Latino community. The Center hosted a Census kick-off day, which allowed an information session for the launch of the 2020 Census to increase participation. The Center has also distributed census merchandise, conducted social media outreach, and provided resources for those in need of help with responses.

Almanza also discussed the challenges and successes that are facing the community due to the COVID-19 pandemic. The pandemic changed their plans unexpectedly.

Challenges include not being able to host in-person events and computer lab times for responses, lack of access to technology for people without their own computers. Successes related to the pandemic have been outreach at previous events before social distancing rules were in effect, transitioning from canvassing to conducting phone banks with Civic Nebraska and providing support via phone calls and referrals to Census phone lines.

This includes statewide educational outreach to promote emphasis on communities of color, those with language barriers, New American populations, and underrepresented communities. Prior to COVID-19 Nebraska Counts conducted door to door canvassing, operated phone banks and text banks, and distributed flyers. Nebraska Counts emphasizes that being counted and seen in the census ensures power for communities.

Engdahl ended the webinar with a powerful message:

“Being counted and being seen in the census equals community power. We continue to build this community power as we work to end injustice in many ways. Including issues of voting rights and equity for black Nebraskans through the means of an accurate 2020 Census count. We will no longer let ourselves go uninformed and we must be counted and accurately represented in decision making and in redistricting in the city, county, and state. This is one way that we can claim our space, represent our existence, and secure our access to this democracy which is meant to serve us.”