MAPA’s Council of Officials announced its annual awards at its annual dinner meeting Oct. 9 at the Blair, Nebraska Marina.

The Award of Merit is MAPA’s highest award for service. Through his work with RDG Planning and Design and the City of Omaha, Shukert was involved in a number of major downtown and neighborhood development projects, including Omaha’s riverfront redevelopment and downtown housing programs. Shukert is recognized as a vigorous advocate for urban design and bicycle/pedestrian interests in Omaha and the Midwest region. This award will be presented in person at MAPA’s Dec. 12 Council of Officials luncheon meeting. 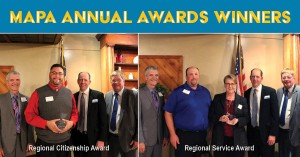 The Regional Citizenship Award honors an individual who recognized regional problems and initiated and supported policies which require shared regional effort, and contributed to the region’s quality of life. As chair of the Nebraska Legislature’s Urban Affairs Committee, Senator Wayne sponsored and prioritized LB492, the Regional Metropolitan Transit Authority Act, which allows Metro to expand to a regional entity beyond its geographical limits within the City of Omaha.

“During his time in the Legislature, Senator Wayne has distinguished himself as a tireless advocate for housing, redevelopment, and transportation among other issues,” said Clare Duda, MAPA Council of Officials President. “He understands the importance of public transit to help the region be more competitive in recruiting and retaining talent and connecting people to jobs and education.”

The Regional Service Award is given to groups that have made a contribution to the metropolitan area to help improve or grow it. The Loess Hills Missouri Rivers Parks to People regional effort works to promote and enhance the culture, nature and community in the Loess Hills region.   This effort is coordinated by Golden Hills Resource Conservation & Development with partners including Pottawattamie, Mills and Harrison Counties as well as the Iowa Parks Foundation, MidAmerican Energy and the Iowa Department of Natural Resources. Since its start in 2015, this collaborative effort has resulted in eight priority projects in the three counties including Frontier Iowa Trails, a regional multi-use trails network, new cabin construction at county parks and recreation areas, and Brent’s Trail, a new eight-mile hiking trail through the Loess Hills in Harrison County.